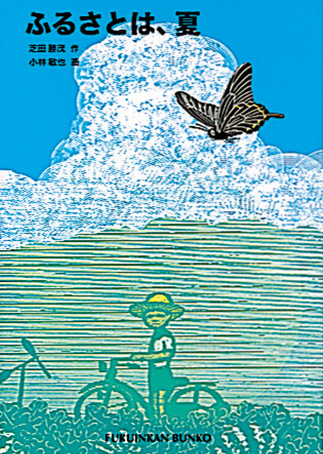 [Summer in the Family Hometown]

One summer vacation, Michio’s parents are too busy with work for him to stay home, so he is sent to his father’s hometown in the countryside for a month. Michio’s father is on poor terms with his own parents, almost to the point of estrangement, so this will be Michio’s first visit to their home, and an entirely new experience for him.

In their village, an annual tradition involving lifting rice bags as a test of strength is revived after being abandoned for some time. Michio takes part, and just barely manages to lift the bag for children before falling over. Embarrassed, he runs from the venue and meets a girl outside named Hisui. Then a white-feathered arrow—said in Japanese folklore to mark the roof of a village household selected by a local deity to provide a girl as human sacrifice—lands nearby, and events take a dramatic turn. Michio runs into a series of suspicious-looking kami (gods) and yōkai (monsters): a god that makes people forget by exhaling on them with breath that smells of myōga ginger, a giant cat god named Butaneko (Pig-Cat), a god of the fields, a god of wealth posting as a god of poverty, a long-haired creature named Nekome (Cat’s Eyes) who does indeed have the eyes of a cat and claims to have taught the villagers to weave, the god of a nearby reservoir, and more. These colorful figures have maintained a quirky, cheerful bond with humans in traditional society over the generations, and the author deftly uses them as a canvas onto which traditional Japanese culture and views of nature are projected.

Through mystical encounters with these comical, all-too-human beings, the mystery of the white-feathered arrow loosed toward Michio and Hisui is gradually revealed. This strange, thrilling summer adventure in a simple village that seems almost frozen in time is both Michio’s first step toward independence and his romantic awakening. His otherworldly experiences in his father’s hometown also give him confidence in the unshakeable bonds he shares with his parents. (NA)

Born in Ishikawa Prefecture in 1949. Has published many works based on his experience as a camp director for children. Has won the Sankei Juvenile Literature Publishing Culture Award and the Japan Juvenile Writers Association Prize. His works include Dōmu-gun monogatari [Dome County Story], Shinjitsu no tane, uso no tane [Seeds of Truth, Seeds of Lies], Niji e no sasurai no tabi [A Rambling Journey to the Rainbow], Bokura no samā kyanpu [Our Summer Camp], and Majikaru misuterī shadō [Magical Mystery Shadow].

Born in Shizuoka Prefecture in 1947. Pursues every aspect of picture book creation, from internal illustrations to cover design. Won the Miyazawa Kenji Prize. His picture books include Donguri to yamaneko [Wildcat and the Acorns], Ginga tetsudō no yoru [Night on the Galactic Railroad], Chūmon no ōi ryōriten [The Restaurant of Many Orders], and Ame ni mo makezu [Rain Won’t], each from the Gahon Miyazawa Kenji [Miyazawa Kenji Picture Books] series written by Miyazawa Kenji. Has also illustrated books including Ōkami no ko ga hashitte kite [Wolf Cub Comes Running] written by Ryō Michiko.