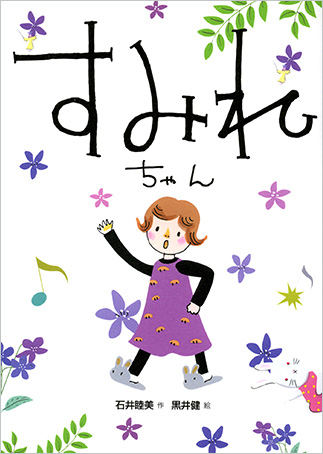 This story vividly depicts the daily life of Sumire, a kindergarten student who doesn’t like her name (which means “violet”). This dislike of her name is representative of her strong opinions about other words, too. She flummoxes her gentle, kind dad by saying that it would be better to be named Florence like the fairy in her picture book, and insists that she will help to think of a name for her sister, soon to be born, using a plant guide. She shares her various anxieties and dissatisfactions over the birth of her sister in her own way, talking with her parents and grandmother. It’s endearing to see her change as she contemplates the matter.

Sumire also has the idiosyncratic habit of suddenly breaking into “songs” when her emotions are overflowing and she can’t properly express what she wants to say. For example, “I didn’t do anything, I didn’t do anything / But really I was going to do something,” or “Being an older sister is a terrible thing / It’s really total pair-des” (she makes a mistake saying “despair”)." Deciphering these thoughts expressed in song is one of the book’s pleasures.

Sumire is like a little philosopher in the childhood period of steady language acquisition, struggling to convey her thoughts and opinions with the words she has available. Later volumes follow her through the first three grades of elementary school: Sumire-chan wa ichinensei [Sumire in First Grade], Sumire-chan no atsui natsu [Sumire’s Hot Summer], and Sumire-chan no purezento [Sumire’s Present]. (OM)

Born in Kanagawa Prefecture in 1957. Has won awards including the Niimi Nankichi Children’s Literature Prize and the Japan Association of Children’s Literature Scholars Prize. Her works include Gogatsu no hajime, nichiyōbi no asa [Sunday Morning in Early May], Tamago to komugiko sorekara madorēnu [Eggs, Flour, and Madeleines], Sara to kami-hikōki [Plates and a Paper Plane], Tsukue no shita no tōi kuni [A Distant Country Under the Desk], Watashi-chan [Little Me], and Majo no Majoran-san [Majoran the Witch]. Has also published picture books including Ōsama no okashi [Galette des Rois] illustrated by Kurahashi Rei

Born in Niigata Prefecture in 1947. Worked as an editor before becoming an illustrator. Has won awards including the Sanrio Art Award  and the Akai Tori Illustration Award. His picture books include Gon-gitsune [Gon the Fox] and Tebukuro o kai ni [Buying Gloves], both written by Niimi Nankichi, Okāsan no me [In My Mother’s Eyes] written by Aman Kimiko, the Korowan [Korowan the Little Dog] series written by Madokoro Hisako, and Kumo no shingō [Cloud Signals] written by Miyazawa Kenji.