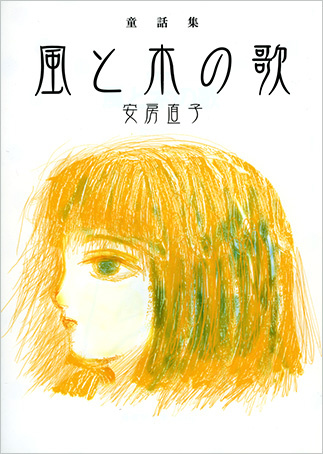 [Songs of Wind and Trees: A Collection of Stories for Children]

This small-format paperback edition of renowned fantasy author Awa Naoko’s first short-story collection (1972) immerses readers in alluring, magical narratives. “Kitsune no mado” [trans. The Fox’s Window] follows a boy who gets lost in the woods and meets a fox cub in a field of blue balloon flowers. The cub, a dyer by trade, dyes the boy’s thumbs and index fingers the same shade of blue as the flowers, giving the boy a mysterious ability. If he makes a “window” with his four blue fingers, he can look through it and see someone he thought he would never be able to see again. The story has appeared in a Japanese textbook for sixth-graders, and stayed with many young readers into their adult years.

Another highlight is the wistful “Sanshokko” [Little Pepper], whose title character is a spirit inhabiting a small pepper tree in a poor farmer’s field. The farmer’s daughter, Suzuna, often plays by the tree with her friend Santarō, sensing Sanshokko’s presence. As Suzuna and Santarō get older and the innocence of youth begins to fade, however, they grow apart and go their separate ways, their feelings for each other left unrequited.

Featuring a total of eight stories, the collection exudes a unique charm as it draws readers into fascinating encounters between ordinary people and extraordinary worlds. Awa’s legacy continues to grow today—nearly 30 years after her death—with new editions of her complete works and short-story collections still in publication, her individual stories being adapted into picture books, and her oeuvre inspiring devoted readers. Much of her work’s appeal comes from its flowing, folktale-like narrative development, mild language and gentle tone, and beautiful landscape descriptions making effective use of color. At the same time, the currents of desire, longing, fear, and sadness that rest in the depths of the human heart permeate her work and resonate with readers on an even deeper level. (FY)

Born in Tokyo in 1943. While a university student, she studied under Yamamuro Shizuka. Has won numerous awards, including the Shōgakukan Award for Literature, the Noma Prize for Juvenile Literature, the Niimi Nankichi Children’s Literature Prize, and the Akai Tori Literary Award Special Prize. Her works include Kitakaze no wasureta hankachi [The North Wind’s Forgotten Handkerchief], Hana no niou machi [The Town Smelling of Flowers], Tōi nobara no mura [A Long-Distant Wild-Rose Village], Hanamame no nieru made [Until the Runner Bean Boiled], Kaze no rōrāsukēto [The Wind’s Roller Skates], and Minami no shima no mahō no hanashi [A Magic Story of a Southern Island]. Passed away in 1993.

Born in Gunma Prefecture in 1936. Taught himself to paint, producing many illustrations and book covers. Has won numerous awards, including the Leipzig International Book Design Competition Award Gold Prize, the Kōdansha Publication Culture Awards Book Design Award, the Shōgakukan Award for Painting, and the Sankei Juvenile Literature Publishing Culture Award. Books he has illustrated include Machinto [A Little More] written by Matsutani Miyoko and Sākasu monogatari [The Entertainer’s Tale] written by Michael Ende and translated by Yagawa Sumiko. Has also written numerous novels and essays and won the Kawabata Yasunari Prize for Literature.