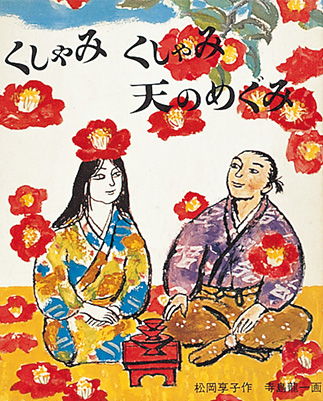 [Sneezing, Sneezing, a Gift from Heaven]

This book contains five cheerful short stories in folktale fashion about bodily function—specifically, sneezes, hiccups, snores, farts, and yawns. In the title story, the mysteriously named boy Achoo’s mother is such a powerful sneezer that she is known as Mama Sneeze. Achoo has his mother sneeze him across the mountains to test his fate, and marries into a wealthy family. In “Tomekichi no tomaranu shakkuri” [Tomekichi’s Never-Ending Hiccups], Tomekichi becomes unable to stop hiccuping after accidentally swallowing an umeboshi (pickled plum) pit, but those hiccups bring him a wife and a fortune.

We also meet Kanta, who snores so impressively that he rises into the heavens and becomes a thunder deity (“Kanta-sama no ibiki” [The Great Kanta’s Snoring]), an old man embarrassed by his farting until one day he is praised by the local lord for being able to fart with a sound like a bush warbler and a smell like plums (“Ume-no-Ki-mura no onara jiisan” [The Farting Old Man of Plumtree Village]), and Ayatarō, a glutton who lazes around so much that sparrows take up residence in his belly, darting in and out when he yawns, and eventually repaying him for providing their living space (“Akubi Ayatarō” [Ayatarō the Yawner]).

Every story is filled with humor and bizarre twists, and the easygoing, big-hearted protagonists all have happy ends prepared for them. The energetic illustrations recall the style of ink wash paintings, deftly evoking a folktale-like world. The author is a master of storytelling whose rich feel for words and rhythmical phrasing means that the text practically cries out to be read aloud. (SJ)

Born in Hyōgo Prefecture in 1935. After working at a library in the United States and a public library in Japan, opened a private library at home while working as a researcher, translator, and writer of children’s literature. Won awards including the Iwaya Sazanami Literature Award. Her many translations include the Kuma no padinton [Paddington] series written by Michael Bond and Shiroi usagi to kuroi usagi [The Rabbits’ Wedding] written by Garth Williams. Passed away in 2022.