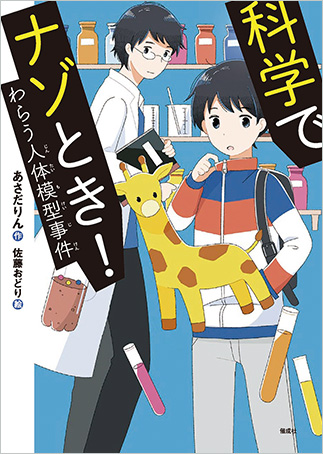 [Science Sleuths: The Case of the Laughing Anatomical Model]

This book, set in a school, packs an abundance of scientific knowledge into its four-part narrative. The protagonist is Shōgo, a cocky sixth-grader and the president of the student council. His father is a science teacher who does instructional science experiments at several elementary schools, one of which is Shōgo’s. He has a personality that his son finds embarrassingly goofy, so Shōgo begs him not to let anyone know they are father and son.

However, strange things keep happening at Shōgo’s school. First, the anatomical model in the science lab bursts out laughing. When he hears that the kids are scared, Shōgo’s father—whom students call “Mr. Giraffe” because of his tall, lanky figure and his habit of carrying a giraffe toy in his pocket—takes them to a park and uses a hose to show them that sound can travel long distances through a tube with virtually no loss of clarity. It turns out that the laughter everyone thought was from the anatomical model had actually come from somewhere else entirely, conveyed to the science lab through an unused water pipe.

The second mystery surrounds a transfer student from a remote island who paints the sunset green in class one day. When his classmates poke fun at him for what they think was a silly color choice, the boy loses his temper. In the book’s third part, a tube of lip balm that a girl in Shōgo’s grade had lost mysteriously shows up in a flower bed, all muddy. Wrapping up the book is the curious case of a mermaid doll, placed in the library by the school’s student librarians, that cries red tears. No mystery can stump Mr. Giraffe, however, who conducts demonstration experiments and explains the concepts behind each case, including light wavelength, liquefaction, and the alkalinity and acidity of chemicals. Over the course of the story, Shōgo also begins to see his father in a new light. The author skillfully infuses the narrative with scientific information to create a delightfully absorbing read. (SY)

Born in Tokyo in 1970. Her pen name derives from two authors she admires: Arthur Ransome and Astrid Lindgren. Debuted with the 2016 kendo-themed novel Masshōmen! [Head-on!], which became a series. The Kagaku de nazotoki! series was inspired by a visit to a science school with her child. Currently lives in Nagano Prefecture.