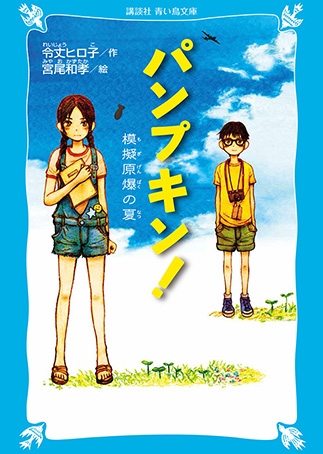 [Pumpkin! Summer of the Imitation Bomb]

Hiroka lives in Osaka. When her cousin Takumi comes from Tokyo to stay with their grandfather who lives nearby, he tells her about a memorial stone outside the convenience store she always visits inscribed “Site where an imitation atomic bomb was dropped.” Hiroka is mystified to learn that a site like this is so close to her house, and asks her father more about it. He helps her look up more information on the computer. Hiroka learns that “imitation atomic bombs” were dropped on 49 sites across Japan from July 20 to August 14, 1945. They were constructed to be almost identical in size and shape to the atomic bomb that would be used on Nagasaki, and were used for pilot training purposes. Due to their shape and color, they were called “pumpkins,” but many people died in these bombings. “Killing people for practice? That’s horrible!” Hiroka says to her father.

Hiroka becomes determined to find out why such awful things took place, and enlists the help of her grandfather and Takumi in learning more about the war and the atomic bomb for her summer holiday research project. She soon finds that every answer only raises more questions, and is on the verge of giving up when Takumi tells her, “Not knowing is scary. You might end up believing something that isn’t true.”

In this story, an ordinary girl finds herself driven by a simple question to look into the matter more deeply, think for herself, and learn about the atomic bomb and the importance of peace. (NA)

Born in Tokyo in 1978. Illustrator. Books he has illustrated include Genbaku to yobareta shōnen [A Boy Called A-Bomb] written by Nakamura Yoshikazu and Watanabe Kō, Chīmu futari [Team of Two] written by Yoshino Mariko, Fushigi yashiki no tenkōsei [The Transfer Student in the Mysterious Mansion] written by Fujishige Hikaru, Ganbare Anzu! [Keep It Up, Anzu!] written by Suzuki Hirofusa, and Bokura wa mori de umarekawatta [We Were Reborn in the Forest] written by Ōgiyanagi Chika.