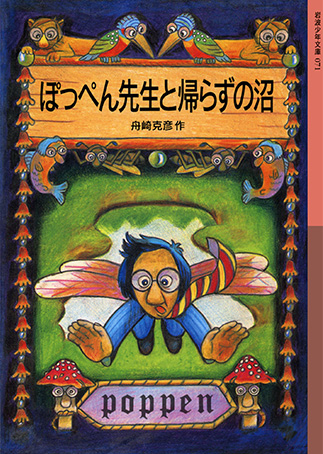 Poppen sensei to kaerazu no numa

[Professor Poppen and the Swamp of No Return]

Professor Poppen, an assistant professor of biology, is studying the ecosystem of the “Swamp of No Return” on his college campus. One day, during lunch, he discovers a rare species of antlion with pink wings. Eager to write about the species for his research, Professor Poppen sets off in hot pursuit. By some odd twist of fate, however, he suddenly transforms into an antlion himself. Given the insect’s brief lifespan, he dies shortly afterward. The antlion is eaten by an elephant-nose fish and Professor Poppen returns to life in that form. Soon, he falls prey to a kingfisher and becomes one himself. He falls in love with another kingfisher, and the two build a nest and begin raising a family.

When a weasel attacks the nest just as the Professor Poppen is at his happiest, he manages to keep his chicks out of harm’s way, but again becomes a meal for his attacker, resulting in his transformation into a weasel. He then devises a plan: he will find a way into a horse’s stomach, become horse meat, and be eaten by a human to return to human form. The plan fails miserably, however, and he finds himself transformed into a mushroom before becoming an ant. A slide into an antlion’s pit trap appears to spell the end for Professor Poppen, but a tiger beetle snatches him and flies him to the garden in front of the cafeteria—where he sees himself, having lunch in his original human form. After much effort, the ant positions himself on the tip of one of Professor Poppen’s chopsticks. With the next bite, he is finally back to normal.

This off-the-wall fantasy brings the ecosystem and all the unusual habits of its inhabitants to vivid life with a splash of humor as its protagonist pursues his zany romp through the food chain, experiencing all the ins and outs of life in the swamp. The book was awarded the fourth Akai Tori Literary Award and adapted into an animated TV special. (NA)

Born in Tokyo in 1945. Won awards including the Robō no Ishi [Roadside Stone] Literature Award, the Akai Tori Literary Award, and the Sankei Juvenile Literature Publishing Culture Award. Often illustrated his own works. His literary works include the Poppen sensei [Professor Poppen] series, Ame no dōbutsuen [The Zoo in the Rain], and Nazo no Mamezukin [Mysterious Hero Mamezukin]. His picture books include the Nihon no shinwa [Japanese Myths] series illustrated by Akaba Suekichi, and Ano ko ga mieru [I Can See Her] illustrated by Ajito Keiko. Also illustrated books including the Mori wa omoshiro-rando [The Forest Is an Interesting Land] series written by Funazaki Yasuko. Passed away in 2015.