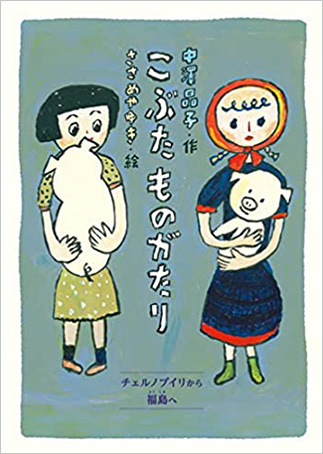 [Piglet Stories: From Chernobyl to Fukushima]

In this work, two stories based on nuclear accidents at Chernobyl in 1986 and Fukushima in 2011 are told by piglets in each location, with a letter in between. In the first story, Marumaru, the Chernobyl piglet, becomes Tanya’s pet and goes with her to school. But after the accident at the nuclear plant, Tanya’s family evacuates and Marumaru is left to search for food with other pigs in the contaminated forest. The letter is from Tanya to Fuyuko, talking about how she traveled to Fukushima to recover her health and was excited to find another piglet that looked just like Marumaru. In the second story, the Fukushima piglet Momo talks about the fun she has as the pet of Fuyuko’s daughter Natsuko. Then the Great East Japan Earthquake and nuclear disaster take place. Natsuko’s family evacuates, leaving Momo to settle in their house. When the family returns three years later, Fuyuko is angry at the pig that has wrecked the house, but in the car Natsuko knows that it is Momo. After the family has driven off again, Momo says, “Don’t forget about me,” sure that Natsuko will return for her.

By depicting these nuclear accidents through the eyes of two beloved piglets, the book helps even young children understand how many beings were harmed by human actions. The stories also convey Tanya and Natsuko’s loss and distress due to the accidents. The warm illustrations with an allegorical touch show the importance of passing on stories about disasters. (DY)

Born in Tokyo in 1943. Has won awards including the Dommelhof International Print Competition Silver Prize, the Shōgakukan Award for Painting, and the Kōdansha Publication Culture Awards Illustration Award. Her picture books include Gadorufu no yuri [Gadolf’s Lily] written by Miyazawa Kenji, Ashita uchi ni neko ga kuru no [A Cat Will Come to My House Tomorrow] written by Ishizu Chihiro, Neko no Chappī [Chappie the Cat], Gentō Sākasu [The Magic Lantern Circus] written by Nakazawa Shōko, and Batto to oa [But and Or].