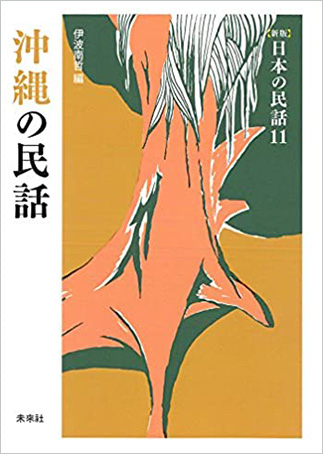 This book presents 40 folktales from Okinawa in southwestern Japan, divided into three sections: Okinawa Island with 28 tales, the Miyako Islands with three, and the Yaeyama Islands with nine. They are retold to make them fun to read for children and, as the foreword puts it, “the tales are adorned with distinctive Okinawa features like its scenery, sea, and sky.”

There are many kinds of stories: “Chidori no uta” [The Plover’s Song], about a marriage between a man and a plover; “Kuwa no tsue” [The Mulberry Cane] and “Ten’nyo no okāsan” [The Heavenly Maiden’s Mother], two tales based on transformative robes of feathers; a fisherman’s journey to the undersea Dragon Palace in “Fushigi na tsubo” [The Mysterious Pot]; a boy’s smart thinking to escape the unreasonable demands of a Satsuma daimyo (feudal lord) in “Tonchi kozō” [The Quick-Witted Boy]; and an explanation for the shapes of the flea and the louse in “Nomi to shirami” [The Flea and the Louse].

Okinawa was an independent nation called the Ryūkyū Kingdom until it became one of Japan’s prefectures in 1879. It became a major battlefield during World War II, in which one quarter of its inhabitants were killed. From the end of the war until 1972, it was administered by the United States, which means it was under American control when this book was first published in 1958. Passing down folktales has been a significant way for Okinawans to instill pride and affirm a sense of identity as a people. Readers can appreciate the folk wisdom and humor, the reverence for nature and interpretations of its mysteries, and admiration for the Ryūkyū Kingdom and feelings of resistance against outside powers. As the reteller is a poet and novelist, the stories have a literary quality, with well-constructed plot development and enjoyable dialogue. (DY)

Born in Ishigaki Island, Okinawa Prefecture in 1902. Moved to Tokyo to join the Imperial Guards Infantry. After being discharged from service, wrote poetry while working as a public servant. Published in a broad range of fields, including poetry, children’s stories, novels, and essays. His works include Oyake Akahachi [Oyake Akahachi], Okinawa fudoki [Okinawan Gazetteers], Sakadachi yūrei: Okinawa kaidanshū [The Handstand Ghost: Okinawan Ghost Stories], Kōban nikki [Police Box Diary], and Kokyō yo saraba [Goodbye, My Hometown]. His poetry books include Dora no yūutsu [Misery of the Gong] and Okinawa fūbutsu shishū [Okinawan Poetry Collection]. Passed away in 1976.