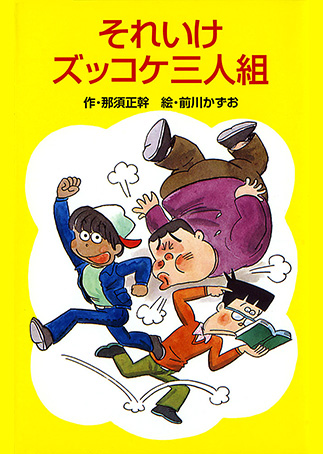 The first chapter of this book, “Sannin-gumi tōjō” [Enter the Three], introduces the sixth-grade trio of the title—Hakase, Hachibei, and Mō—clearly defining them by their individual quirks. Hakase studies every morning in the toilet, despite the complaints of his little sister. Hachibei is a class clown who arrives early and waits for the school gate to open, so he can get his favorite place in the school playground. Slow-moving Mō strolls into school after classes begin. One day, Hakase is in the toilet when burglars break into his home, but when he writes a message calling for help on toilet paper and drops it out of the window, the other two can’t read the word “burglary” and don’t know what to do. The third-person narration giving an overview of the action, and the light dialogue revealing the characters’ personalities combine to depict the confusion surrounding the trio. Manga artist Maekawa Kazuo’s illustrations add further life to the characters.

There are four more stories, including those describing an attempt to scare girls by setting up a ghost doll in the pond and a trip to a castle site to dig up an ancient shell mound. Sometimes the boys’ adventures touch on social issues, as when the boys find a woman who has committed suicide, or when a cave one of them strays into at the castle site turns out to be a wartime bomb shelter. The humorous characters and eventful episodes made the book a hit with readers, and it became a popular series with 50 volumes. (OM)

Born in Hiroshima Prefecture in 1942. Writes across a broad range of fields, including picture books, children’s stories, novels, and nonfiction. The Zukkoke sannin-gumi series has 61 volumes including later stories when the characters are middle-aged. Has won numerous awards, including the Robō no Ishi [Roadside Stone] Literature Award, the Noma Prize for Juvenile Literature, and the Iwaya Sazanami Literature Award. His works include Sagishi tachi no sora [Swindlers’ Sky], Nendo no kamisama [The God Made of Clay], and Hiroshima sanbusaku [Hiroshima Trilogy]. His picture books include Bokura no chizu ryokō [Our Trip with a Map] and Hiroshima no genbaku [The Hiroshima Atomic Bomb], both illustrated by Nishimura Shigeo. Passed away in 2021.

Born in Osaka in 1939. Widely active in fields such as manga, picture books, and illustrations. Has won awards including the Shōgakukan Children’s Manga Award and the Japan Cartoonists Association Award. His picture books include Emaki ehon: kawa [River: A Scroll Picture Book], Ohisama ahaha [The Sun and Laughter], and Hoshi no ko Piko machi ni kuru [Pico the Star Child Comes to Town]. Has published picture story books including the Usagi no Toppin [Toppin the Rabbit] series and picture-story show card sets including Henteko ojisan [A Strange Man]. Has also illustrated books including Obāsan nandemo sōdanjo [Grandma’s General Consulting Room] written by Nasu Masamoto. Passed away in 1993.