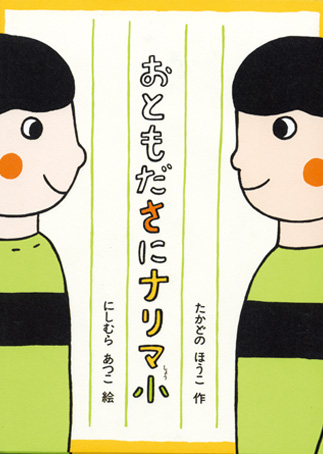 Haruo is a new first grader at a small hill school with just 15 students. One morning, he thinks that the friends who normally walk with him to school have left him behind, so he sprints off alone down the mountain path to school. When he arrives, things seem oddly different. Haruo’s teacher inexplicably gives him a prize for doing the best job on his homework assignment, and his classmates look strange, with different clothes and hairstyles from normal. He can hardly make out the message on the blackboard, which the student-council president has written in a befuddling mix of kanji (Chinese characters), hiragana (the standard Japanese syllabary), and katakana (an alternate Japanese syllabary). When the bell rings at the end of the day, Haruo’s jaw drops in amazement when the teacher and all his classmates flip around in the air and turn into foxes. Haruo unknowingly spent the day at a fox school, and the students’ assignment had been to take human form so that they would be able to make human friends more easily. Haruo runs home as fast as his legs can carry him.

A few days later, all the students at Haruo’s real school are surprised to receive curious letters full of ineptly scrawled and awkwardly spelled sentences like “Let’s B Frenz.” Next comes an official invitation from the principal at the fox school, and Haruo and his friends soon find themselves setting off on a field trip to meet the foxes, who long for human friends.

While the zany story packs plenty of laugh-out-loud moments, it is heartwarming to see how the foxes’ determination to befriend Haruo and his schoolmates gradually fosters an emotional bond between the two groups. The manga-esque illustrations burst with humorous touches, adding to the enjoyment factor. For first-grade readers just beginning their formal language learning, the foxes’ little mistakes—writing letters backwards and using kanji incorrectly—make the story relatable and all the more engaging. Otomodasa ni narima shō is one of the most popular entries in the author’s impressive body of fun stories for readers aged 7–10. (FY)

Born in Hokkaidō Prefecture in 1955. Writes across a broad range of fields, including picture books, children’s stories, and full-length novels. Some books are illustrated by the author. Has won numerous awards, including the Sankei Juvenile Literature Publishing Culture Award and the Noma Prize for Juvenile Literature. Her picture books include the Tsuntsuku sensei [Mrs. Tsuntsuku] series and Mā-chan no nagai kami [Little Mā’s Long Hair]. Her works include Ruchia-san [Ms. Lucia], Shinshi to obake shi [The Gentleman and Mr. Ghost], the Henteko mori no hanashi [Tales of the Strange Forest] series, and Jūichigatu no tobira [The Door to November].

Born in Tokyo in 1972. Her picture books include the Honehone-san [Mr. Skeleton] series, No o koete [Beyond the Field], Tobi masu yo [We Fly] written by Uchida Rintarō, and Gugiga-san to Fuheho-san [Mr. Gugiga and Ms. Fuheho] written by Kishida Eriko. Has also illustrated books including Toranpu ojisan to Peronji no nazo [Uncle Trump and the Mystery of Peronji] written by Takadono Hōko.