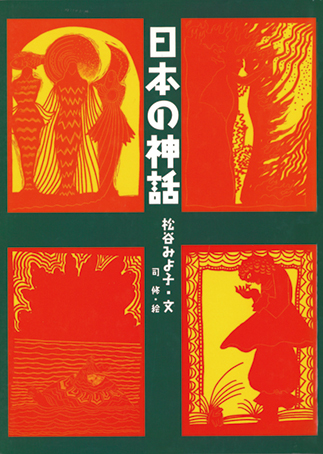 Since ancient times, people have told stories about gods and creation. In Japan, traditional mythology was recorded for posterity in books like the Kojiki [Records of Ancient Matters], Nihon shoki [Chronicles of Japan], and Fudoki [Gazetteers]. In Nihon no shinwa, Matsutani Miyoko offers a selection based mostly on the first volume of the Kojiki, the “Jindai no maki” [Book of the Age of the Gods]. Many gods appear in Japanese mythology. They are rich in individuality, by turns loving, hating, and squabbling with each other. In some ways they seem quite human. Matsutani was drawn to the generosity, innocence, and humanity of Japanese mythology, and decided to share with today’s children what was in the hearts of people in ancient times. The book includes 19 tales in all, beginning with the creation of Japan and its gods.

Long ago, before heaven and earth were clearly separated, Ame no Minakanushi, the deity who controls the universe, ordered the male and female deities Izanagi and Izanami to create a beautiful, prosperous country in the world below. In “Kuni-umi” [Country-birthing], Izanagi and Izanami combine their powers to create the islands of Japan and many other gods. In “Yomotsu hirasaka” [Passage to the Underworld], their love turns to hate. In “Sannin no kami” [Three Gods], sun goddess Amaterasu, moon god Tsukuyomi, and sea god Susano’o no Mikoto are born.

Myths are born from wishes, fears, and prayers. Each individual story in this collection can be enjoyed alone, but when the book is read through as a whole, it offers a glimpse of a Japanese landscape home to countless gods, where deities and humans have always coexisted. (SJ)

Born in Tokyo in 1926. Studied under author Tsubota Jōji. Wrote children’s stories and literature while enthusiastically collecting and studying folktales from various regions. Won awards including the Akai Tori Literary Award and the Shōgakukan Award for Literature . Her works include Tatsu no ko Tarō [trans. Taro the Dragon Boy], Chiisai Momo-chan [trans. Little Momo-chan], Futari no Iida [trans. Two Little Girls Called Iida], and Ano yo kara no hi [Fire from the Land of the Dead]. Her picture books include Inai inai bā [trans. Peek-a-Boo] illustrated by Segawa Yasuo and Machinto [A Little More] illustrated by Tsukasa Osamu. She passed away in 2015.

Born in Gunma Prefecture in 1936. Taught himself to paint, producing many illustrations and book covers. Has won numerous awards, including the Leipzig International Book Design Competition Award Gold Prize, the Kōdansha Publication Culture Awards Book Design Award, the Shōgakukan Award for Painting, and the Sankei Juvenile Literature Publishing Culture Award. Books he has illustrated include Machinto [A Little More] written by Matsutani Miyoko and Sākasu monogatari [The Entertainer’s Tale] written by Michael Ende and translated by Yagawa Sumiko. Has also written numerous novels and essays and won the Kawabata Yasunari Prize for Literature.