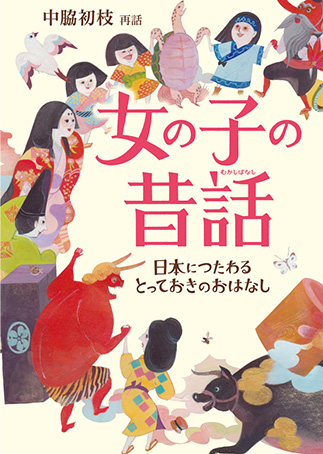 Japanese folktales about boys and virtuous old men like “Momotarō” [trans. Peach Boy] and “Hanasaka-jii” [trans. The Old Man Who Made Flowers Bloom] are well known. But across Japan, many stories are also told in which girls, women, and grandmothers play the starring role. For example, “Warashibe chōja” [trans. The Straw Millionaire] is a well-known story about a dutiful son who starts with a single piece of straw and, through a series of trades, makes his fortune, but in Iwate Prefecture’s version, the protagonist is the youngest of three sisters. “Shitakiri suzume” [trans. The Tongue-cut Sparrow] is usually a tale about a mean old lady snipping off a greedy sparrow’s tongue with a pair of scissors, but in Akita Prefecture, it is an old man who cuts the bird’s tongue and an old woman who wins the treasure. This book retells 20 such tales with female protagonists. All the stories are retold in standard Japanese, but traditional words from the relevant region are used where appropriate: pata-pata, kekerō for a crowing rooster, and pin pararin for the sound of beautiful hair being combed.

Common folktale patterns in which the youngest sister of three or a girl bullied by her stepmother finds happiness are repeated here. However, there are also tales with unique structures: “Akai chō to kiiroi chō to shiroi chō” [The Red Butterfly, the Yellow Butterfly, and the White Butterfly], about three butterfly sisters who get along splendidly, and “Otsuki Ohoshi” [Otsuki and Ohoshi], in which Otsuki (“Moon”), who is bullied by her stepmother, comes to the rescue of her step-sister Ohoshi (“Star”). There are also rollicking tales, like the story of a woman whose farts have incredible power, or Okane, a woman so strong she can lift an ox along with its burden. It is encouraging to learn that tales about so many different types of women have been handed down so vividly. (OM)

Born in Tokushima Prefecture in 1974. Won the Botchan Literary Award while still in high school and made her debut as an author. Active as a writer as well as a collector, reteller, and narrator of folktales. Her works include Sakana no yōni [Like a Fish], Kimi wa ii ko [You’re a Good Child], Watashi o mitsukete [Find Me], and Chā-chan no mukashi-banashi [Chā’s Folktales]. Her picture books include Māya no saru taiji [Māya’s Fight with a Monkey] illustrated by Karaki Miyu and Korya mate mate [trans. Wait! Wait!] illustrated by Sakai Komako.

Born in Nara Prefecture in 1984. Her creative activities include picture books, illustrations, set design, and murals, based mainly on myths and classic literature. Books she has illustrated include Manga de wakaru: “Nihon kaiga” no mikata [Understanding How to View Japanese Paintings Through Manga] and Manga de wakaru “Nihon kaiga” no tēma [Understanding Themes of Japanese Paintings Through Manga], both edited by Yajima Arata. Has also published picture books including Māya no saru taiji [Māya’s Fight with a Monkey] written by Nakawaki Hatsue.