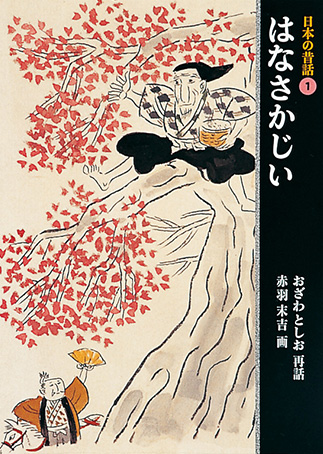 “Hanasaka-jii” [trans. The Old Man Who Made Flowers Bloom], in which an honest old man and woman raise a puppy they find in a box floating downriver until one day it leads them to buried treasure (by saying “Dig here, woof woof!”); “Momotarō” [trans. Peach Boy], about a boy born from a peach who leads a dog, a monkey, and a pheasant to fight ogres; “Shitakiri suzume” [trans. The Tongue-cut Sparrow]; “Nezumi no mochitsuki” [The Mice That Pounded Mochi]; “Saru-kani kassen” [trans. The Monkey and the Crab] . . . Japan is home to many folktales, and these five volumes contain 301 of them. The collection is structured to match the flow of Japan’s seasons, from Volume I, with stories evoking New Year’s Day and springtime, to Volume V, with its wintery selection of tales. Collectively, the stories offer a vision of people who grew up and lived in many different ways among the changing seasons, encountering animals and supernatural beings along the way.

The tales were originally recorded in their local dialects, but the author, also a folktale researcher, has retold them using standard Japanese in a way that still allows the reader to grasp their original nature as oral literature. Heroes and enemies are clearly indicated with extreme characterization; events occur three times to leave an impression; and cruel scenes like characters being mutilated and even eaten are expressed frankly, without retailed details. The tales begin with mukashi (“long ago”) but end with traditional closing lines from the local dialect where they were collected, ranging from formulas like iki ga pōn to saketa (“and the family prospered”) and dondo hare (“all was fine”) to partly onomatopoeic expressions like toppin parari no sansho no mi. These phrases have a mysterious ring sure to give today’s children a sense of the appeal of traditional language. At the end of each book are pictures of “implements and tools that appear in folktales” and information about the source for each story. (OM)

Born in Manchukuo (modern-day northeast China) in 1930. After research on the Grimms’ fairy tales, moved on to research and comparative study of Japanese folktales. Established the Ozawa Folktale Institute in 1998. His works include Mukashi-banashi towa nani ka [What Are Folktales?] and Gurimu dōwa no tanjō [Birth of the Grimms’ Fairy Tales]. His picture books include Kachikachi-yama [Click-Clack Mountain], Umakata yamanba [The Packhorse Driver and the Mountain Witch], Miruna no kura [Warehouse of Do-not-look], each illustrated by Akaba Suekichi, and Sanmai no ofuda [The Three Charms] illustrated by Kanaida Etsuko.

Born in Tokyo in 1910. Moved to Manchukuo (modern-day northeast China) in 1932 and returned to Japan in 1947. Published his first picture book Kasajizō [Six Jizō and the Braided Hats] written by Seta Teiji in 1961. Was the first Japanese artist to win the Hans Christian Andersen Award for Illustration, and is highly praised both in Japan and abroad. His picture books include Momotarō [Peach Boy] written by Matsui Tadashi, Sūho no shiroi uma [trans. Suho's White Horse] written by Ōtsuka Yūzō, and Oni zoro zoro [A Troop of Ogres] written by Funazaki Yoshihiko. He passed away in 1990.