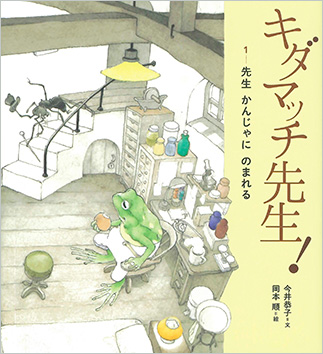 [Doctor Yellowpolk! I: Swallowed by a Patient]

The first book in a series about Doctor Yellowpolk, a talented frog physician with yellow polka dots, and his interactions with patients and family members.

Doctor Yellowpolk is a kind and friendly practitioner. He bandages the leg of an elderly ant with a bone fracture and teaches breathing techniques to a lizard suffering from lack of oxygen after her husband stepped on her head. One day, he hears a calf is sick and makes his way to the pasture. The calf’s parents and other farm animals look on as Doctor Yellowpolk enters its mouth to discover that it has swallowed a ball. He goes in further to the stomach to retrieve the ball, and has himself dragged out with string, covered in saliva.

The difference in scale between Doctor Yellowpolk and his patients is comical, while their sicknesses and injuries—whether the bone problems of the old, issues caused by marital stress, or objects accidentally swallowed by young children—make one think of similar cases in humans. The realism of the illustrations brings a sense of the actual world of nature.

As of November 2021, there were six volumes in the series. In the fourth, the doctor goes to see his wife, who has a taste for the glamorous and dislikes country life, residing in the city instead. In the fifth, he visits his son, who wants to grow up while still remaining a tadpole. Doctor Yellowpolk’s worries make it easier for readers to warm to him. (DY)

Born in Hiroshima Prefecture in 1949. Won awards such as the Ogawa Mimei Literary Award Grand Prize and the Japan Association of Children’s Literature Scholars Prize. Her works include Arukidasu natsu [The Summer of Walking Forward], Andoromeda no inu [The Dog from the Andromeda], Zensōkyoku wa aremoyō [Rough Prelude], Kirikabu monogatari [The Tale of the Stump], Busa-inu Kūkī wa kōun no omamori? [Kooky the Ugly Dog Is a Lucky Charm?], and Marutenjō no shita no “wao!” [“Wow” Under the Dome]. Kidamatchi sensei! is her first picture book series.

Born in Aichi Prefecture in 1962. After making his debut as a manga artist, became an illustrator. Winner of the Japan Picture Book Award. His picture books include Kitsune, kitsune, kitsune ga tōru [Make Way for Foxes, Foxes, Foxes] written by Itō Yū, Tsukiyo no sanbiki [Three Animals in the Moonlit Night] written by Takadono Hōko. Books he has illustrated include Orenchi, dōbutsu byōin [My Father Is a Vet] written by Yamaguchi Satoshi, Uchū kara kita kanzume [The Can from Space] written by Satō Satoru, and Karasu no iibun [The Crow’s Claim] written by Shimada Yasuko.