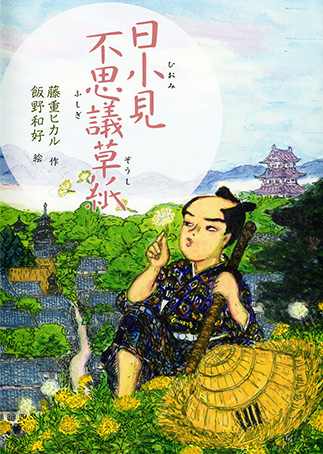 This collection transports readers back to the Edo period (1603–1868) for five fantasy-filled short stories.

The first is “Tachibana Tanpopomaru no koto” [The Tale of Tachibana Tanpopomaru], about a poor samurai, Roppeita, who hates the idea of killing. One day, a 300-year-old monkey gives him an ancient sword with a strange power: whenever Roppeita wields it in battle, a dandelion pops out of his nose and makes his adversary burst out laughing. Now Roppeita can win every showdown without hurting a fly.

“Kusa-kanmuri no hanayome” [The Bride with the Grass Crown] is the story of Seishichi, a drifter with amnesia who works at a tofu shop. When a little girl comes to the shop to buy deep-fried aburaage, Seishichi gradually remembers his past: he was once married to the princess the little girl works for, and was originally a fox.

The next selection is “Oharu no enogu” [Paints from Oharu]. Apprentice painter Shinkichi is sketching in the spring fields when he meets a girl named Oharu. She offers to get Shinkichi some of the colorful paints he desires if he paints her picture. Shinkichi agrees, but soon finds himself so busy in his rise in the world that he struggles to complete a painting to give to her. When he finally does, he arrives just in time to see her fade away, revealing herself as a rainbow-colored butterfly in the winter snow.

“Ryūgaseki” [Ryūgaseki] tells the story of Ueda Kakunoshin, a bear in human form who enlists the help of his fellow bears to dam the river and save their forest home. In “Osetsu neko kaburi” [Osetsu in Cat’s Clothing], a girl named Osetsu ventures into a mysterious cat world in search of a cure for her wounded father, and tries on a magical coat that transforms her into a cat as well.

The quirky short stories in this collection have well-woven narratives offering a fun, engrossing read. They are interspersed with extra material drawing connections between the present day and the Edo period, deliberately blurring the line between reality and fiction, and the accompanying illustrations add another delightful layer to the book’s sense of humor. (SY)

Born in Chiba Prefecture in 1965. While working as an interior architect, started writing picture and children’s books. Winning a competition run by the children’s literature magazine Tobu kyōshitsu [The Flying Classroom] led to his debut as an author. His literary works include Sayonara obake danchi [Goodbye, Ghost Housing Complex],  Kyōshitsu ni yūrei ga iru!? [Is There a Ghost in the Classroom!?], and Fushigi yashiki no tenkōsei [The Transfer Student in the Mysterious Mansion]. He wrote and illustrated the picture book Mawaru osushiyasan [Sushi Conveyor Belt Restaurant] (monthly picture book, Kodomo no tomo [Children’s Friend]).