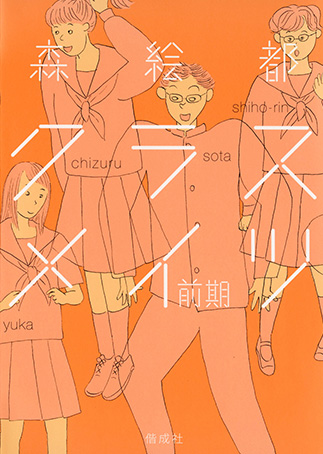 At Chizuru’s junior high school, there are only two first-year classes. Chizuru finds herself assigned to 1-A, but her best friend from elementary school is in 1-B. Feeling lonely on the first day of school, she gathers the courage to speak to Shihori, the girl sitting behind her. The two quickly become friends. Two weeks later, their circle widens to include another girl named Reimi. Reimi signed up for volleyball club as soon as school started, but Chizuru and Shihori were both unsure about which club to join. In the end, they join the brass band together.

Kurasumeitus is divided into two volumes, one for each half of the school year. There are 24 students in the class, and each of these classmates steps forward to star in their own section of the book. Chizuru’s section comes first, followed by Shihori’s. In autumn of sixth grade, while Shihori was temporarily away from school with a cold, she was banished from her circle of friends by two girls she used to be close to. These unpleasant memories make her uneasy when her friendship with Chizuru expands to include Reimi, as she fears she may be rejected again. When Reimi skips school the day after she is singled out by name by a cyber-bullying post on a student council website, Shihori and Chizuru go to visit her. We soon learn that the post was written by Sōta, one of the two class clowns, who feels trapped and unable to confess to the deed. Sōta is then swept up by a second event that shakes the entire class.

Interconnected episodes viewed from 24 diverse perspectives thus depict the entire school year. Each of the classmates has their own worries and issues to deal with, and the result is a story that is by turns comical and serious but always fresh: a message of encouragement for children at this difficult age. (NA)

Born in Tokyo in 1968. Writes across a broad range of fields, including children’s literature and novels. Has won numerous awards, including the Naoki Prize, the Muku Hatojū Children’s Literature Award, the Noma Prize for Juvenile Literature, and the Shōgakukan Award for Children's Literature. Her works include Rizumu [Rhythm], Uchū no minashigo [Orphans of the Universe], Tsuki no fune [Moon Ship], Karafuru [trans. Colorful], Daibu! [Dive!], and Ran [Run]; her picture books include Kibō no bokujō [Hope Ranch] illustrated by Yoshida Hisanori and Boku dake no koto [Things That I Only Have] illustrated by Sugiyama Kanayo.