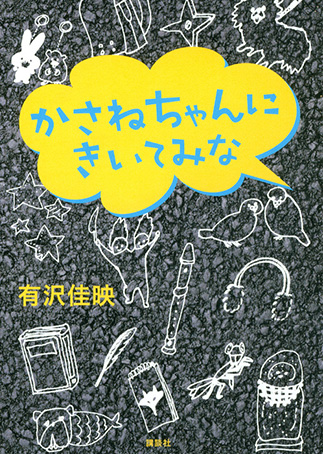 Yukkī is a fifth-grader and the deputy leader of his walking group (the students he walks to and from school with, who range from first to sixth grade). Every day, he watches how well group leader Kasane-chan, a sixth-grade girl, manages the squad, and feels uneasy about the prospect of taking over her role the following year.

The group has plenty of other students. Mayuka is a fourth-grade girl who loves fashion. Tarō and Jirō, two brothers in second and third grade, are absolutely obsessed with ninja training. Nontan, a second-grader, is a quiet girl who never talks at school. Mitsu, a first-grader, was such a troublemaker in her last walking group that she was reassigned to Kanae-chan’s. Finally, Ryūsei is a fourth-grade boy who gets picked on a lot at school because of his odd behavior: he is restless, wears a thin sweat suit he has long outgrown to school every day—even in the middle of winter—and has a habit of asking an old lady who feeds the pigeons for some extra bread crusts whenever he gets hungry.

On the way to school, Kasane-chan always tells her group a long, ongoing story she makes up as she goes along. The story is about how an unpopular child, a cursed fish, and a pair of twins who share a body save a flooded town. Every time she starts into the tale, the group follows along the route without any problems.

When Ryūsei’s mother leaves his family, he is taken into foster care and then goes to live with his grandmother. The rest of the children in the group, concerned about Ryūsei, decide to each give him a Christmas present, and Kasane-chan and Yukkī set off to deliver the gifts to him.

With a light, humorous touch, Arisawa Kae’s narrative takes an honest look at how children deal with the challenges of their different home environments and school lives. The book lands with a powerful, meaningful message: all children can be themselves and live their own lives if they have support from each other and the adults around them. (DY)

Born in 1974 and lives in Gunma Prefecture. Debuted after winning the Kōdansha Award of Children's Literature for Newcomers for her Anazā shūgaku ryokō [Another School Trip], a story about seven characters on a curious school trip. Since then, has written works of children’s literature. Won the Japan Association of Children’s Literature Scholars Newcomer Prize and the Muku Hatojū Children’s Literature Award. Has also published Oniwa-ban deizu: Aizawa Gakuen joshiryō nikki [Garden Guard Days: Aizawa Gakuen Women’s Dormitory Diary], a story with more than 70 characters.