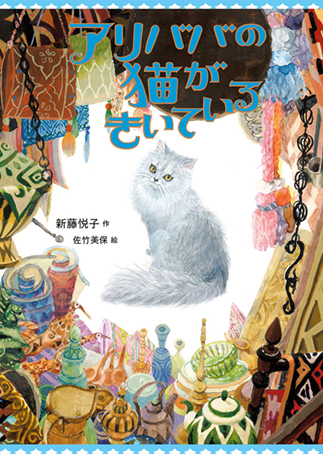 Sheikh is a Persian cat owned by Ali Baba, an Iranian linguist living in Japan, and is a special “elder” breed able to understand the words of people and objects. This ability makes the breed popular in Iran, where they are known as “bazaar cats.” While Ali Baba is away on a business trip, Sheikh is left in charge of the Open Sesame store, which sells folk crafts from around the world. Every evening, he hears stories from the goods that have arrived from far-flung locations. This includes Mrs. Tile, who is beautifully illustrated with birds and was once the lid for a honeybee hive in Iran, and Ms. Cord, who was woven by a nomad girl and adorned a bride’s camel in Afghanistan. There are also the Amazon Rascals, ceramic animals created by an Amazon schoolteacher, and Blueglass Boy, a rare Herat glass made in an Afghan workshop. These stories develop connections with the lives of people around, like Mr. Ishizuka, owner of the Open Sesame store; Naghmeh, an Iranian girl studying at a local Japanese class; Shōko, a chef at the restaurant opposite; and Pepe, a Nikkei Peruvian who was formerly Shōko’s student.

In the objects and people from diverse backgrounds who gather at Open Sesame, one sees how war, social change, and other local conditions affect different parts of the world. But as these are seen through Sheikh’s eyes from a slightly elevated perspective, the book is easy to read. A warm fantasy showing multiculturalism in a corner of contemporary Japan. (OM)