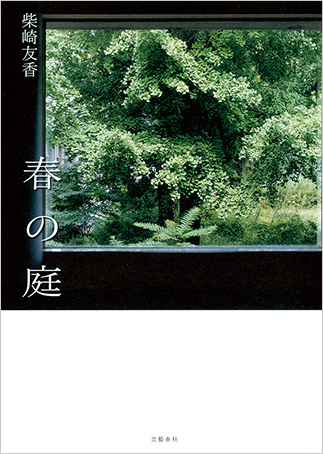 Following his divorce, Tarō moves into the View Palace Saeki III, a decrepit two- story apartment building scheduled for demolition. The eight units are cramped, and most of the residents live alone. One day Tarō notices Nishi, a tenant on the apartment’s second floor, gazing wistfully at the light-blue house next door.

Nishi is an unsuccessful manga artist who became fascinated by the light-blue house and the life of the family living there after discovering it in a collection of photographs titled Haru no niwa when she was a high-school student. Unable to forget the house after moving out to live on her own, she tracked it down and moved in next door.

The story is nested in structure. Nishi delves into the lives of the couple who built and lived in the house before leaving it behind, and she becomes friends with the new owner so that she can see inside. Tarō watches this carefully. Finally, another layer is added when Tarō’s sister is seen observing the other two characters. The light-blue house and the apartment building are the story’s real protagonists, with space itself playing the central role, transected by the characters who appear in the story. With precise descriptions and a finely calibrated sense of space, the author makes a bold experiment a resounding success.

The human characters are not just supporting roles, though. Tarō, Nishi, and the couple who built the light-blue house all have experienced the breakup of their households. Love, family, and everyday life are as fragile as glass: that is the message, conveyed with great emotional power, through this story of a house. It is a fairy tale for adults about the memory of past injuries and journeys of healing. (CK)

Born in Osaka Prefecture in 1973. Her 2000 debut novel Kyō no dekigoto [What Happened Today] came to prominence after it was made into a film. Received the Oda Sakunosuke Prize and the Minister of Education Encouragement Prize for New Artists in 2007 for Sono machi no ima wa [What That Town Is Today], the Noma Prize for New Writers in 2010 for Nete mo samete mo [Sleeping and Waking], and the Akutagawa Prize in 2014 for Haru no niwa. Other works include Shōto katto [Short Cut] and Shudaika [Main Theme].