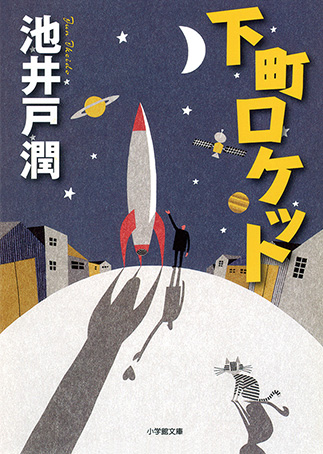 Working out of a small factory in an unfashionable part of Tokyo, a tiny family firm called Tsukuda Manufacturing succeeds in developing a rocket engine valve based on one of its main products. But at the same time, the company faces an unprecedented crisis, having lost its major client and facing a massive lawsuit for patent irregularities from one of the industry’s biggest players. The rival plans to push Tsukuda Manufacturing into bankruptcy and swallow it up for next to nothing.

With the help of a specialized attorney the company manages to overcome the crisis. But no sooner has the company weathered one storm than another arises: Teikoku Heavy Industries, Japan’s largest aerospace manufacturer, makes an offer to buy the patent. Company president Tsukuda Kōhei is determined that the firm should manufacture the components itself rather than selling its rights for short-term profits. But the unprecedented size of the offer provokes a conflict of opinion. Once negotiations start, however, Teikoku’s arrogance sparks the employees’ sense of pride. Banding together to work on product development, they eventually contribute to the successful launch of a domestically built rocket.

The fast-paced storyline makes the book hard to put down. The story is intricately plotted, and Ikeido breathes life into all his characters. The scenario of a small company tyrannized by big business is reminiscent of the good-against-evil theme of popular historical novels. This tale of the weak overcoming the strong through superhuman efforts appeals to Japanese readers’ sympathy for the underdog. (CK)

Born in 1963 in Gifu Prefecture. After working at a bank, he was awarded the Edogawa Rampo Award in 1998 for Hatsuru soko naki [Without End] and the Naoki Prize in 2011 for Shitamachi roketto. In 2013 his novels became a huge hit in the television drama adaptation Hanzawa Naoki. His other books include Sora tobu taiya [The Flying Tire], Nanatsu no kaigi [Seven Meetings], Hanasaki Mai ga damattenai [Hanasaki Mai Speaks outl, Rikuō, Tamiō, and Akira to Akira.