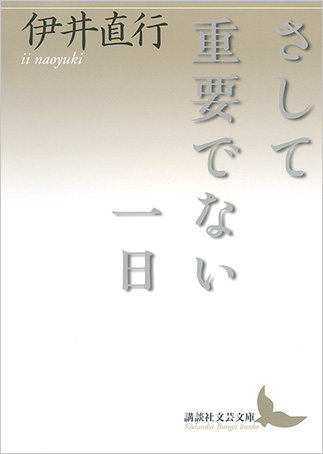 [A Day of Little Importance]

For some reason, there is a tendency to think of “salaryman” as a synonym for “commonplace.” Perhaps this is why there are few remarkable works with salaryman protagonists in contemporary Japanese literature. The author aims to subvert the stereotype with a humorous yet faithful depiction of the daily life of a truly commonplace office worker. In doing so, he squarely tackles what salarymen do at their companies and what kind of organizations companies even are in the first place.

The protagonist generally only appears as “he,” making it difficult for readers to connect a name to the character. Yet in presenting his personality as a “hardworking and energetic nihilist,” the author offers a fresh representation of the many salarymen who support Japanese society. As “he” frets over the watching eyes of his boss and colleagues, particularly the female employees who scrutinize his every move, he struggles to conceal his faults and frays his nerves in making up for work errors. Ultimately, there are perhaps no essential workers at companies, and he may be no more than an interchangeable cog. But salarymen suppress this knowledge, hounded by the deadlines of the work in front of them.

Although the work was originally published toward the end of the boom days of Japan’s “bubble era,” the way of thinking of people who work for companies remains fundamentally unchanged to this day. It seems to be an element in the construction of Japanese identity. (NK)

Born in Miyazaki Prefecture in 1953. Received the Gunzō New Writers Award in 1983 for Kusa no kanmuri [Crown of Grass], the Noma Prize for New Writers in 1989 for Sashite jūyō de nai ichinichi, and the Hirabayashi Taiko Award in 1994 for Shinka no tokei [Evolution Clock]. Other works include Kanashimi no kōkai [Voyage of Sorrow], Kaishain to wa nanimono ka? [What Is an Office Worker?], and Ai to iyashi to satsujin ni kaketa shōsetsushū [A Collection of Stories Without Love, Healing, or Murder].