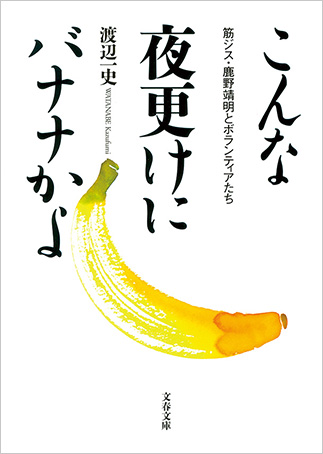 [A Banana? At This Time of Night?]

Shikano Yasuaki suffers from a severe form of a condition known as progressive muscular dystrophy. He was first diagnosed in the sixth grade. By the age of 18, his leg muscles had deteriorated to the point where he had to use a wheelchair. It would be normal for him to spend his whole life being cared for by his parents or living in a special facility, but on turning 23 the highly individualistic Shikano chooses a life of independence. He goes into the streets and distributes fliers, places advertisements in newspapers, and recruits volunteers.

Those who answer his call are mainly university students and housewives, who form a community with Shikano at the center. The book describes the cohort of some 500 people.

Shikano admits himself that he is self-centered. He must rely on others not only at each of his three meals a day but also for assistance in going to the toilet and bathing, removal of phlegm with a suction device, and administration of medicine. Even so, he does not hesitate to give orders to the volunteers. Once he even wakes a volunteer in the middle of the night, saying that he wants to eat a banana—the source of the book’s title.

Nonetheless, the volunteers keep coming. They are not helping him out of simple kindness; they seek to reconsider their own situations, finding this an opportunity to think seriously about how they should live their lives. Through caring, they gain valuable experience and learn a lot. This is described in great detail via the daily routine of someone with a disability, the lives of volunteers, and the changes in their thoughts and inner feelings. (CK)

Born in Aichi Prefecture in 1968. Lived in Osaka from junior high school until entering university. Moved to Sapporo upon enrolling at Hokkaidō University and maintained Hokkaidō as a base after dropping out to become a freelance writer. Won the Kōdansha Nonfiction Award in 2003 and the Ōya Sōichi Prize for Nonfiction in 2004 for Konna yofuke ni banana ka yo. Has also received the 2012 Suntory Prize for Social Sciences and Humanities and other awards.