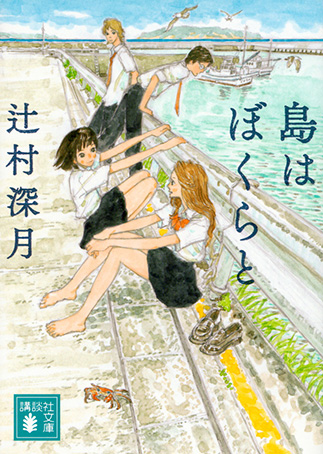 [The Island Stays with Us]

Akari, Kinuka, Genki, and Arata are high school students living on Saejima, a fictitious island in the Seto Inland Sea. Cut off from the mainland, tiny Saejima has no high school of its own, and the four teenagers must board a ferry every day to travel to a school on the mainland.

The novel depicts the inner lives of these young people during the emotional upheaval of adolescence. At the same time, it reveals the daily lives of the people around them through their eyes, creating a kind of tableau of provincial life.

The youngsters are islanders, intimately familiar with the small village where they grew up. At the same time, they spend most days in school on the mainland, which gives them a double perspective. This mobile, “in between” point of view makes them particularly astute in their observations of emigrés who have escaped the confines of the island and settled on the mainland.

The novel is meticulously constructed, with remarkable attention to detail. The stories of the individual characters stand alone but appear to the reader not as unrelated fragments but as threads woven together into a single tapestry.

Perhaps the novel’s greatest strength is its gentle, rhythmic language. Tsujimura’s subtle writing conveys both the tranquility of provincial life and the feeling of suffocation young people can experience in rural communities, especially on a remote island. With its unusual setting for a contemporary coming-of-age novel, Tsujimura’s book makes skillful use of literary techniques carefully attuned to the tastes of the urban reader. (CK)

Born in Yamanashi Prefecture in 1980. Received the Mephisto Award in 2004 for her debut Tsumetai kōsha no toki wa tomaru [Time Stops in the Cold School Building]. Further received the Yoshikawa Eiji Prize for New Writers for Tsunagu [Link], which was later made into a film, and the Naoki Prize for Kagi no nai yume o miru [Dreams Without Keys], which was made into a television drama. Other works include Kōri no kujira [Frozen Whale], Boku no mejā supūn [My Measuring Spoon], and Surō Haitsu no kamisama [The God of Slow Heights].