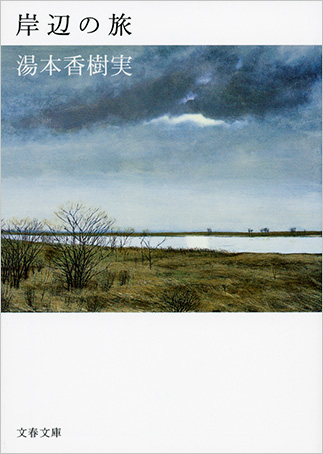 One day, the first-person narrator of the story is in the kitchen making shiratama dumplings. Suddenly, there in the semidarkness behind the serving table is her husband, Yūsuke—he has come back. He has been missing ever since he disappeared three years previously but has returned to eat her dumplings, which he loved. Yet Yūsuke says he has been eaten by crabs at the bottom of the sea. And now he is preparing to go somewhere again.

“Come on, hurry up. It will soon be daybreak.”

The two pack their things and set out. The husband is no longer living but cannot die without closure. There is something he has to tell his wife, and their journey retraces the path he has taken to do so. The couple visits a newspaper delivery shop and a maker of gyōza meat dumplings; they then help out with the work in a tobacco field in the hills. They are interacting with people who know the husband, but it is hard to tell whether they are living or dead. However, as the couple drift along, the people they meet accept them completely naturally. While going back and forth between this world and the next, the narrator fills in the blanks of her husband’s three-year absence.

“I wanted to apologize properly,” says Yūsuke, gazing out to sea. As the two sit together on the shore, a Jacob’s ladder to heaven finally appears. The narrator tells Yūsuke’s soul that it is time to part, and, carrying both of their bags, once more starts to walk. This beautifully peaceful tale tells of a present-day descent into the realm of the dead. (SH)

Born in Tokyo in 1959. Her first novel, Natsu no niwa: The Friends [trans. The Friends], won newcomer’s prizes from the Japanese Association of Writers for Children and the Japan Juvenile Writers Association. Natsu no niwa has been made into a film and stage play, has been published in translation in over 10 countries, and has won the Mildred L. Batchelder Award and the Boston Globe−Horn Book Award.