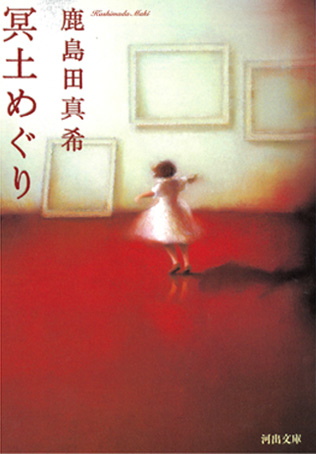 [trans. Touring the Land of the Dead]

A couple board a shinkansen train in Tokyo and take a short trip out of the city together. The thirty-six-year-old husband lost the use of his arms and legs after a sudden stroke eight years ago. Despite the initial shock, for his wife, Natsuko, the past eight years have been an improvement on what came before. For Natsuko, the days before her marriage, when she lived with her mother and younger brother, are a bitter memory she longs to put behind her. “Something back there was bothering her—not poverty, not loneliness, not illness—but ‘something.’” The trip with her husband turns out to be an opportunity to bring this mysterious “something” back into the light and confront it directly.

They stay in a now faded and cheap hotel, once an exclusive resort and a favorite of Natsuko’s mother. For Natsuko, the hotel’s fall from its glory days mirrors the decline of her own family and home since the death of her father. Her mother and brother, hopelessly attached to their more prosperous past, continue to spend profligately despite their reduced circumstances. Their thoughtless behavior has been a constant threat and torment to Natsuko. Over the course of the trip, Natsuko comes to realize that her husband is a person of remarkable strengths, free of such family troubles, despite the physical handicap he has borne since his illness. Through its tale of the difficult life of one woman, this Akutagawa Prize– winning novel movingly depicts the disappointments of life in contemporary Japanese society and suggests a glimmer of hope. (NK)

Born in 1976. Became an ardent admirer of Dostoyevsky and other Russian literature while a high school student. Awarded the Bungei Prize in 1998 for her debut work Nihiki [Two Animals] while studying French literature at Shirayuri College. Awarded the Mishima Yukio Prize in 2005 for 6000 do no ai [Love at 6,000 Degrees], the Noma Prize for New Writers in 2007 for Pikarudī no sando [Picardy Third], and the Akutagawa Prize in 2012 for Meido meguri, becoming only the second person to achieve this “triple crown.”