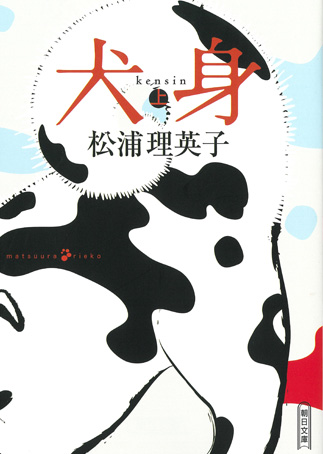 Matsuura Rieko’s Kenshin is based on the extraordinary premise of a woman transformed into a dog that becomes the pet of the woman she loves. At the same time, it presents a brutally realistic family relationship, overflowing with feelings of abnormal love and hate, which contrasts sharply with the pure meeting of souls of the dog and owner.

Matsuura made her biggest splash with the 1993 Oyayubi P no shugyō jidai [trans. The Apprenticeship of Big Toe P], a novel with an unconventional plot that shocked readers in which she explored her unique outlook on sexuality.

In this work, unbound by the conventions of an ordinary story, she gives her imagination even freer rein, and by doing so strikes a chord in readers’ hearts. In the novel, the heroine in the form of a dog tells the Mephistopheles-like man who demands her soul, “My soul is damaged and must taste extremely bad.”

“Don’t worry,” he replies, “A well-beaten soul tastes good, just like certain kinds of meat.” With the kind of exquisite humor and earnestness epitomized in this dialogue, the story cultivates new ground for the contemporary novel. Dog-related puns feature throughout. Even the title has a double meaning: “a dog’s body” and “devotion.” (NM)

Born in Ehime Prefecture in 1958. Became an avid reader of writers including Cesare Pavese from her teens. While still an undergraduate, debuted with Sōgi no hi [The Day of the Funeral], which won the Bungakukai New Writers Award in 1978. Received the 1994 Women’s Literary Prize for Oyayubi P no shugyō jidai and the 2008 Yomiuri Prize for Literature for Kenshin. Her other works include Nachuraru ūman [Natural Woman], Ura vājon [Opposite Version], and Yasashii kyosei no tame ni [For a Gentle Castration].