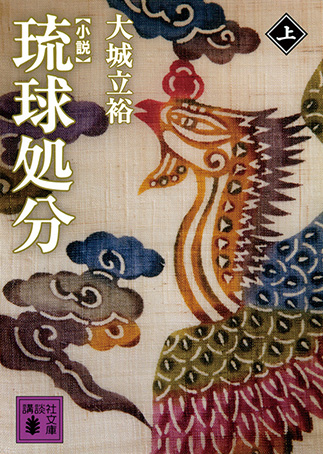 [The Ryūkyū Disposition: A Novel]

The Ryūkyū Kingdom (present-day Okinawa Prefecture) was a demilitarized country formed in the fifteenth century. At the beginning of the seventeenth century, though, it was conquered by the Shimazu clan, the feudal lords of the Satsuma Domain (present-day Kagoshima Prefecture). That began a period of dual subordination for the Ryūkyū Kingdom: it was ruled by the Shimazu clan while being a vassal to the Ming and Qing courts in China. After the Meiji Restoration in 1868, the international situation in East Asia changed dramatically, and the earlier international order collapsed. First, the Meiji government abolished the Ryūkyū Kingdom, establishing the Ryūkyū Domain in its place, and soon carried out a punitive expedition to Taiwan. Before long, the authorities in Ryūkyū, who had pinned their hopes on escaping Satsuma rule, found themselves facing a harsh reality.

This novel is based on the historical fact of the Japanese annexation of the Ryūkyū Kingdom. Interweaving fact and fiction, it recreates the scene from early modern history known as the “Ryūkyū Disposition.” With an ingenious structure and a powerful literary style, it depicts the pain of the Ryūkyūans as they were tossed about by the power struggle between the great powers.

Superior works of art stand the test of time. This novel is truly that kind of rare masterpiece. Rather than fade over time, it has a power that deepens with age. Many readers, as they read this novel, will be reminded of the current situation in Okinawa, which remains adrift in a stormy international situation, and of the frustration felt by the prefecture’s residents. This work is filled with so many thoughts that the topic of localities is too small to discuss them all.

Through the expressions of people who lived through this actual moment in history, this novel vividly depicts what can never be captured by the concept of “modernity” or the idea of geopolitics: the angry waves of inner turmoil and the sadness that only the local residents can feel. (CK)

Born in Okinawa Prefecture in 1925. After the war, he held various positions, serving in the Government of the Ryūkyū Islands and as director of the Okinawa Prefectural Museum, while continuing to work on his writing. In 1967, with the novella “Kakuteru pātii” [Cocktail Party], he became the first Okinawan writer to receive the Akutagawa Prize. He won the Kawabata Yasunari Prize for Literature in 2015 for Rēru no mukō [The Other Side of the Tracks]. He has written many novels, plays, and essays on the history and culture of Okinawa. The 13-volume Ōshiro Tatsuhiro zenshū [The Collected Works of Ōshiro Tatsuhiro] was published in 2002. Passed away in 2020.