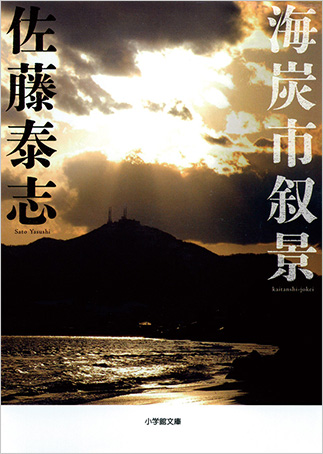 This novel is set in a town surrounded by the ocean, apparently Hakodate, in Hokkaidō. On the edge of the town is a small mountain that attracts many tourists with the night view from its summit, accessible via aerial tram. In the late 1980s, however, unable to find its way out of a structural depression, the town quickly began to lose its vitality and its vision for the future. With a deeply sympathetic touch, the novel successively depicts the figures of 18 “ordinary people” doing their best to survive in this environment and links them together in a large chain.

The young man who is laid off from the coal mine. The junior high school student who skips school and wanders around town alone. The streetcar operator nearing retirement age. The bare-chested sailor who bursts into a bar late one night in the middle of winter. The office worker addicted to horse racing. Through the figures of such people, who have no connection to each other apart from living in the same town, this novel makes us clearly aware of the smell of the ocean and the light of the northern country that pervades their lives, and it brings into bold relief the truth of life’s preciousness.

The author committed suicide before this book was published. Although this is a novel that uncovers the profound sadness and despair held by common people, it is also a tale in which signs of hope shine brightly in many places—just like the “diamond dust” that breathes luminous life into the mountains in winter. Additionally, the 2010 film adaptation, directed by Kumakiri Kazuyoshi, has been praised as a masterpiece that preserves the flavor of the original work. (NK)

Satō Yasushi Born in Hokkaidō Prefecture in 1949. Was nominated for the Akutagawa Prize five times, including for “Kimi no tori wa utaeru” [And Your Bird Can Sing]. Soko nomi ni te hikari kagayaku [The Light Shines Only There] was nominated for the Mishima Yukio Prize. He took his own life in 1990. His works have been adapted to film: Kaitan-shi jokei in 2010, Soko nomi ni te hikari kagayaku in 2014, a story from the collection Ōgon no fuku [Golden Clothes] in 2016, and “Kimi no tori wa utaeru” in 2018. Also, Mō hitotsu no asa: Satō Yasushi shoki sakuhin-shū [One More Morning: The Early Works of Satō Yasushi] was published in 2011.