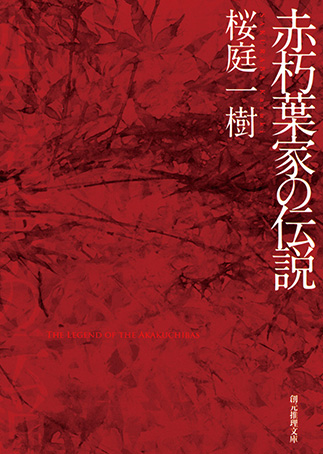 [trans. Red Girls: The Legend of the Akakuchibas]

“One summer, when she was ten years old, Akakuchiba Man’yō saw a man fly through the sky. Man’yō is my grandmother.” With those opening lines, the curtain rises on this saga, which follows three generations of women from the 1950s to the twenty-first century.

Man’yō, the narrator’s grandmother, was a baby abandoned by “mountain people.” Taken in and raised by a young husband and wife in the village, she grows up and marries a suitor from the Akakuchiba family, an old house that made its fortune in the iron industry and holds sway over the village. Man’yō occasionally displays the qualities of someone with supernatural powers and is called “Mrs. Clairvoyant.” Man’yō’s daughter Kemari, on the other hand, makes a name for herself tearing around town as the leader of the largest female motorcycle gang in the San’in region. In time, she turns over a new leaf and blossoms as a talented writer of girls’ manga. Kemari’s daughter Tōko is a completely ordinary girl. Unable to find any goals in life, she lives as a “NEET” (a young person not in education, employment, or training). But as she explores the mystery of her grandmother’s deathbed confession of having killed a person, she runs into the truth of an astonishing murder.
A native of Shimane Prefecture, Sakuraba Kazuki is one of the preeminent storytellers of our time. In this big-boned, full-length novel, which revolves around the rise and fall of a village supported by the iron industry in Shimane, she lets her magical realistic imagination run wild. Possessing the appeal of both a fantasy and a mystery, this tale will captivate readers and satisfy them with its recreation of postwar Japanese history from a female perspective. (NK)

Born in Shimane Prefecture in 1971. Gained a large readership with the GOSICK series, which began in 2003. Received the Mystery Writers of Japan Award in 2007 for Akakuchiba-ke no densetsu [trans. Red Girls: The Legend of the Akakuchibas], which is considered to be one of her “major early works,” and its English translation was longlisted for the James Tiptree, Jr. Award in 2016. Also received the Naoki Prize in 2008 for Watashi no otoko [My Man].