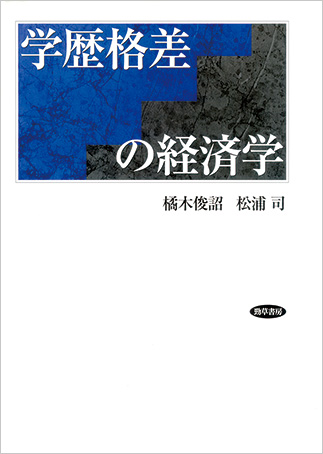 [The Economics of Academic Disparity]

By Tachibanaki Toshiaki and Matsuura Tsukasa

This book is not about the educational system per se. Rather, it looks at things like selecting schools and choosing between arts or sciences from an alternative perspective. The idea of interpreting problems in Japanese education—such as overemphasis on memorized facts, fierce competition for entrance into schools and colleges, and emphasis on academic background—from the angle of their economic effects is of great interest.

From the country’s point of view, education is a means for shaping society and ensuring the succession of culture, whereas from the point of view of the individual, it is often an economic activity with clear objectives. The increasing number of Japanese students moving away from science has recently become a topical issue, with the underlying reasons considered to be related to the school system and teaching methods. This book carries out a statistical analysis and shows that compared to people with a humanities background, those with a science and technology background are at a clear disadvantage in terms of both income and position. It also takes a fresh look at one aspect of contemporary Japanese society by looking at such areas as the relationship between academic background and parents’ income, the secrets of the popularity of medical schools, the reasons why private elementary and junior high schools get preference, and how Waseda and Keiō came to be prestigious universities.

Knowledge of the state of education is essential to understanding Japanese culture. However, information on the public education system and school administration is not enough for true understanding. Areas untouched by the power of public education, such as the role of cram schools or the awareness of students and parents, impact enormously upon the awareness and behavior of Japanese people and upon the state of Japanese society. In that sense, this is an essential volume for understanding Japan. (CK)

By Tachibanaki Toshiaki and Matsuura Tsukasa

Born in 1977. An associate professor at the Faculty of Economics of Chūō University, where he specializes in applied economics.