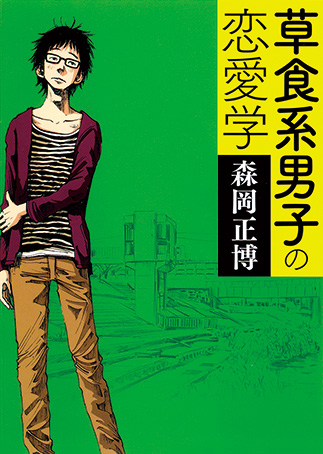 [Lessons in Love for the Herbivore Man]

The term “herbivore man” gained currency in 2009, when it was a top-10 finisher in the contest for new word or buzzword of the year. The appearance of the term actually dates back to 2006, but there is no doubt that it was this book that sparked the surge in interest in herbivore men—young males who seemingly lack ambition and sexual drive.

The book does not actually examine these young men as a social phenomenon. Its aim is to teach young men who are by no means uninterested in sex and love, but remain unassertive, how they should go about having relations with women. As it happens, this sort of guidance accurately captures the traits and the mentality of those dubbed “herbivore men.”

Other countries seem to regard Japan as still a male chauvinist society, where the man rules the roost at home. The baby-boom generation born in 1947–49 certainly looked up to the macho type, and many middle-aged or older men see wolfishly chasing after the opposite sex as a sign of manliness. However, the herbivore men of this book are totally uninterested in struggles for supremacy. Men of the younger generation respect women and listen humbly to what women have to say; they also see displaying their own weaknesses as a virtue.

Needless to say, this book is popular among young men, but a great many young women are also keen readers. It tells of a quiet change taking place in relations between the sexes. (CK)

Born in 1958. A philosopher. Professor of human sciences at Waseda University. His research and writing cover fields including bioethics, modern thoughts, and civilization theory. Published works include Kanjinai otoko [Man Without Feelings], Seimei kan o toinaosu [Rethinking Our View of Life], and Seija to shisha o tsunagu [The Link Between the Living and the Dead].