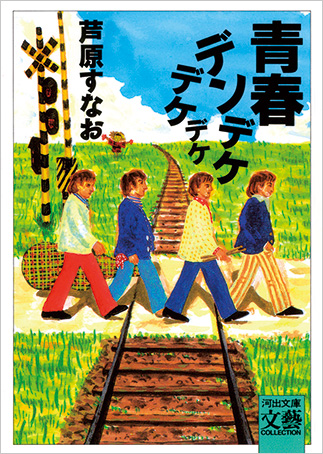 This is a novel about high school life in a provincial town, told in the first person. Fujiwara Takeyoshi, the protagonist, goes by the nickname of Chikkun. Enthralled by rock music, he decides to get some friends together to form a band. With money earned from their part-time jobs the friends get hold of their instruments, and the Rocking Horsemen, the band they so desperately wanted to form, is ready to go. But this is a rural town in Shikoku, where most people do not yet know about Western music—even trying to find somewhere to practice is fraught with difficulty. Luckily, the school music teacher, Satō, agrees for the band to be an official school club activity, so they are able to practice at the school. None of them have any experience of performing, but they pour their hearts and souls into practicing. Eventually they get the chance to play at the opening party of a restaurant and bar run by an acquaintance. Their first performance is a rather chaotic affair, but for the band members it is a valuable learning experience. Their subsequent performance at the school festival is a huge success, and their school life finally draws to a close.

This novel is set in the 1960s. Considering when it was published, it could have been little more than reminiscence about youth. But this work is not just a piece of nostalgia for days now lost—its re-creation of the details of the young people’s passion as they lose themselves in rock music makes it a lively piece of writing. The writer uses the local Sanuki dialect to express the energy of the young characters, and the witty written style turns youthful blunders into happy episodes. Perhaps this explains the book’s tremendous popularity among young people. It is certainly of great interest to anyone who wants to know what sort of novels Japanese high school students like. (CK)

Born in 1949. Attended a doctoral course in literature at Waseda University. Won the 27th Bungei Prize in 1990 for Seishun den deke deke deke, later made into a film titled The Rocking Horsemen in English, and was awarded the 105th Naoki Prize the following year. Other works include Mimizuku to orību [The Horned Owl and Olive] and No ni sake, azami [Bloom Wild, Thistles].