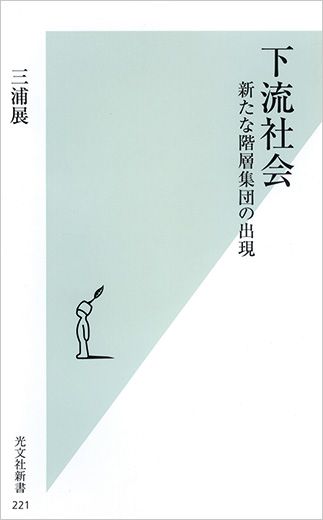 The title of this book is a coinage of the writer that reflects the changes that have come to Japan, a place where rapid economic growth once made the vast majority of the population middle class. “Downwardly mobile” goes beyond low income alone and refers to people with low communicative abilities and few desires in life, including a lack of the will to work or study.

The author uses a wealth of data to empirically demonstrate, from the standpoint of marketing analysis, that Japan is being transformed from a nation that was once dominated by the middle class into a downwardly mobile society. He makes the case that economists and sociologists who have researched social classes to date have neglected the concept of consumption, so he conducted his own fieldwork in November 2004 and May and June 2005, asking people whether they considered themselves upper, middle, or lower class and analyzing their consumption trends according to their self-identification.

His results show that the downwardly mobile trend is strong among the second baby-boom generation, whose members are now in their early thirties. As this was the first generation born after Japan had developed a middle-class consciousness, these people grew up not knowing a gap between society’s haves and have-nots, which the author says has led to a lack of desire to improve their station. This book will become an important source of data for understanding contemporary Japanese society. (MK)

Born in 1958. Earned a degree in social sciences from Hitotsubashi University. Served as editor-in-chief of the marketing magazine Across published by Parco Co., and then worked at the Mitsubishi Research Institute. In 1999 established the think tank Culture Studies. Author of many works, including Fasuto fūdoka suru Nihon [ Japan’s Increasingly Casual Cultural Climate], Daiyon no shōhi [The Fourth Phase of Consumption], and Tōkyō wa kōgai kara kiete iku [Tokyo Will Disappear from the Suburbs].