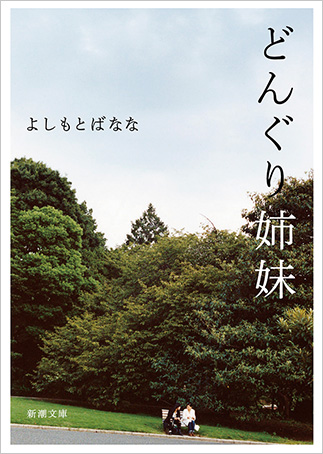 The chance meeting of a lifetime, a gift from God . . . Such an encounter is inevitably the start of a tale. Once tools like Facebook make it possible to keep tabs on everybody’s whereabouts, though, romantic chance meetings are unlikely to happen ever again. In this era, the world needs an author like Yoshimoto Banana. She writes at depth on the mystery of chance in a small tale, showing us the importance of its serendipity—how unexpected chance can give us inspiration, how it can be the strength for us to grasp good fortune.

In this work, two sisters, Donko and Guriko, lose their parents when they are still children and reach adulthood in an unstable environment. Well acquainted with heartache, the two take the time outside their regular jobs to start up an anonymous, free personal website, where they reply to users’ reports of various troubles. Via email, Guriko takes on the malaises spreading throughout the society of the day; at the same time, though, she somehow cannot bring herself to search for her own special someone over the Internet. Somewhere inside she has the conviction that when the time comes, she will know with absolute certainty.

One day in a seaside town, she meets a person who appears to be the mother of the man she is looking for. It is then that she learns of his sad fate. Nonetheless, Guriko quietly persuades herself that this was not just a chance meeting—rather, her own thoughts, which she had previously sent out, had bounced from person to person before actually connecting.

This novel teaches us to treasure and maintain the feeling of anonymous goodwill and shows the importance of imagining what lies behind a meeting that appears to be by chance. Do our lives become so much more effective just through prompt information delivered under a real name? This story is essential reading for modern people, who will want to consider their Facebook-type daily lives, so hurried that they strip away the empty canvas of chance. (OM)

Born in 1964. Her novel Kitchin [trans. Kitchen] was awarded the Kaien Prize for New Writers in 1987. Awarded the Izumi Kyōka Prize for Literature in 1988 for “Mūnraito shadō” [Moonlight Shadow]. Won the Minister of Education Encouragement Prize for New Artists in 1989. Awarded the Yamamoto Shūgorō Prize in the same year for Tsugumi [trans. Goodbye Tsugumi]. Recipient of numerous international awards. Translations of Kitchin and other works have been published in more than 30 countries.