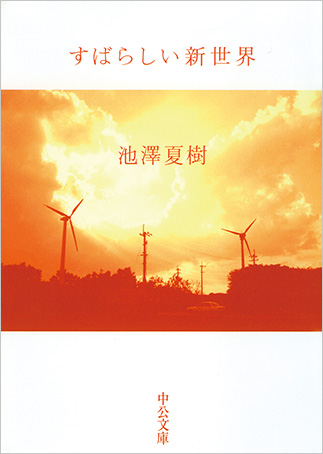 How much electricity are renewable energy sources expected to generate in the future? Japan has started to give this question serious consideration following the Great East Japan Earthquake and the subsequent accident at the Fukushima Daiichi Nuclear Power Plant. But this full-length story about the potential of wind power generation was serialized in a newspaper beginning in 1999.

The protagonist, Amano Rintarō, is a midlevel employee at an electric power machinery manufacturer that is also involved in the nuclear power business. He designs a small wind power generating device and travels to Nepal to set it up. His dreams are grand: “If every house could be fitted with a storage battery and the electricity use curve could be evened out, there would be no need to build power stations to meet peak demand,” he thinks. “A superconductive power grid and large-scale solar power plants in the desert would work.”

Together with an American journalist friend, Amano puts forward a vision in this book—published more than a decade ago—that we are waiting to see implemented in the post-Fukushima world of today. His wife, Ayumi, is also haunted by the thought that there is something unsafe about their comfortable, tidy Tokyo lifestyle. She too becomes increasingly interested in environmental issues and sets out to take practical action.

In Hikari no yubi de fureyo [Touching with Fingers of Light], the 2008 sequel to this full-length work, Ayumi wanders across Europe, working in agricultural communes. Through her activities, the author puts forward his grave objections to the mass-production, mass-consumption societies of today’s industrialized world.

But the everyday interactions of Rintarō, Ayumi, and their son, Shinsuke, are by no means ponderous or argumentative. Rather, they are lighthearted and human. Through the two books we see the teenager Shinsuke squabbling with his parents, or innocently going on dates as he grows to adulthood, in detailed episodes that make worthwhile reading. (OM)

Born in 1945. Began career as a translator and poet. Awarded the Akutagawa Prize in 1988 for Sutiru raifu [trans. Still Lives]. Has won numerous awards, including the Tanizaki Jun’ichirō Prize for Mashiasu Giri no shikkyaku [The Fall of Macias Guili] in 1993. Edited the 30-volume Sekai bungaku zenshū [Collection of World Literature] from 2007 to 2011. In 2001 Subarashii shin sekai won the Minister of Education’s Art Encouragement Prize.

Inquiries regarding other languages:
Bureau des Copyrights Français
Email: myriam.dartois＠bcf-tokyo.com
(When sending an e-mail, please enter a half-width character "@" instead of a full-width character "＠.")