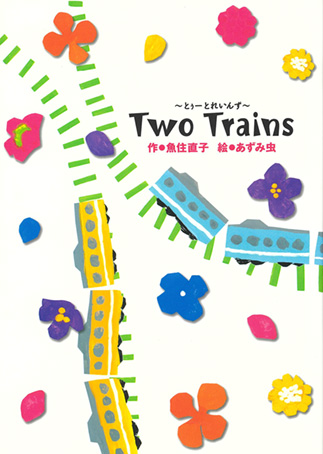 A collection of five short stories depicting troubles at school between tween girls. In the first story, “Henshin” [Change of Heart], the bullied protagonist becomes isolated when the balance is upset in her usual group of three friends. By talking to a girl who has decided not to join any groups, she wins the confidence to be herself. The second story, “Mijuku” [Baby], is about a girl’s heartache over a newly appointed, inexperienced music teacher, who is nicknamed “Baby” and bullied by the class. The third, “Baka jan!” [Idiot!], is about Erina, a transfer student who has problems with friends at both her former and new school. She realizes on meeting friends from her old school that she’d mistakenly thought her friends were making fun of her. The fourth story, “Shin’yū ni naritai” [Let’s Be Good Friends], describes how Natsumi tries and fails to become particularly close to Risako in their group of four friends, but acts coldly to Kanako, who adores her, and comes to regret this. The final story, “Tū toreinzu” [Two Trains], is about Hinata, who travels by train to piano classes near her former home after her parents’ divorce. At the station, she meets Misaki, who always takes the opposite journey, and becomes friends with her, learning that Misaki makes regular trips to visit her grandfather in hospital.

The book carefully adopts the perspective of girls in early adolescence to portray their assumptions, lack of confidence, and difficulties in keeping appropriate distance from others. All of the protagonists make mistakes, are hurt and sad, and feel anger, but because the stories unfold until they build new relationships, readers are left feeling refreshed. (DY)

Born in Fukuoka Prefecture in 1966. Received the Kōdansha Award of Children's Literature for Newcomers for her debut Hi baransu [Unbalanced]. Has won awards including the Shōgakukan Award for Children's Literature and the Japan Association of Children’s Literature Scholars Prize. Her works include Pink no kamisama [The Pink God], Engei shōnen [Gardening Boys], Mikan, suki? [Do You Like Mikan Oranges?], Kuma no atarimae [What’s Expected for Bears], Ten kara dodon [A Bolt from the Blue], Happī famirī [Happy Family], Iroha no ashita [Iroha’s Tomorrow], and Iitai koto ga arimasu! [I Have Something to Say].

Born in Kanagawa Prefecture in 1975. Does magazine, book, and advertising works with illustrations on metal cuttings. Has won awards including the Kōdansha Publication Culture Awards Illustration Award and the Sankei Juvenile Literature Publishing Culture Awards Art Award. Her picture books include Pitat! [Clinging Tight], Tsuru-kame tsuru-kame [Keep Your Fingers Crossed] written by Nakawaki Hatsue, Onebō-san wa dāre? [Who Overslept?] written by Katayama Reiko, and Watashi ga Tepingī [I Am Tepingy] written by Nakawaki Hatsue. Currently engages in creative activities while moving back and forth between Alaska and Japan.